Now that I am working with some friends, I have been asked to teach them how to deal with the command line to do some basic troubleshooting. To accomplish this, I believe the first step is the understanding of the main elements of a FusionPBX server and how they interact with them. So here it is.

Please note that this article is agnostic of having a stand-alone server or a cluster deployment.

The following diagram shows them. 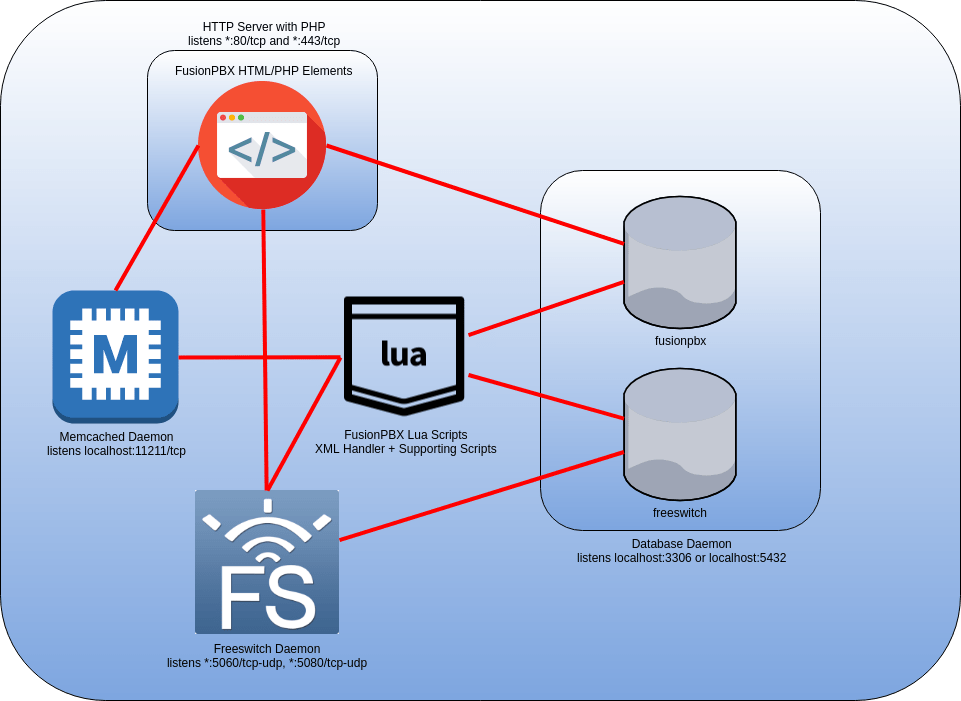 There is a fifth element who is not a daemon. The Lua scripts which I will write about them later.

Whatever is your preference, Apache or NGINX+PHP-FPM, the HTTP server is the one that displays the PHP part of FusionPBX. Each time you create an extension, modify an IVR or set up a DID, the HTTP server (well the PHP scripts), will interact with the FusionPBX database and flush the Memcached if necessary. If you need to do some other management actions, such as reloading a module, monitoring a call or watching who is registered, the PHP scripts will interact directly with the FreeSWITCH daemon to ask this kind of information.

Memcached function in this kind of deployment is not to share information but to speed it up. Each time an element is accessed by the XML Handler (read below), a copy of the element is stored in order to save future database queries. A Memcached server will always server the requested object faster than a database, and even if theMemcachedd does not have the requested object, you only wasted few mili-seconds. Having a Memcached is optional, but it really helps the speed.

Some LUA scripts may use the Memcached server to store volatile information as well.

The XML Handler and Supporting Scripts

Before explaining the FreeSWITCH, it is important to explain what is the XML Handler and the suppporting scripts. FusionPBX is not the only PHP, it includes as well a set of LUA scripts. Many of them are just helping in the call flow, for example, the black list application or the call screen one. But there are others that are much more important than that, those that gives life to the XML Handler.

The XML Handler is a FreeSWITCH internal element that as the same says, it deals with the XML. FreeSWITCh internals need all the information in XML format. When you install a vanilla FreeSWITCH server, without FusionPBX, you will see many examples of dialplans. If you open one of those files, you will see that everythign is in XML. Therefore, the XML Handler is the bridge between the database and the XML that the FreeSWITCH needs.

It is not a must that the XML Hander is written in Lua or to be local scripts. There are many other ways to write one (other languages or remote XML Handler scheme), but the Lua language has always been the preference because of the run-time speed. If you were thinking how the XML Handler relates to the database and how to speed it up: yes, the XML Handler may call the Memcached daemon before the database to see if the information is there.

One advantage of using the XML Handler is that you do not need to send reloadxml signals each time you modify something. FreeSWITCH will not remember data if you are using an external XML Handler. This is very handy if you are writing dynamic systems that needs to get different dialplans based on external conditions.

The FreeSWITCH daemon is the one who gives life to the PBX system. Thing on it as the heart of the VoIP deployment. The FreeSWITCH daemon will deal with the SIP and RTP handling, but that is not all the functions; one of its more popular functions is the event handler. The event handler is the way the FusionPBX PHP scripts, or any other external software, communicate with the PBX and send some orders. When you ask the FusionPBX Web UI to display the current calls, the PHP scripts connect to the FreeSWITCH daemon and ask for the current calls. The Event Handler will send the information and the PHP scripts will format in a beautiful way for you.

With this brief overview, I think now we are clear how the elements work. I will write later who they interact when someone register or a call is placed.

Do you need some FusionPBX free support? Join this FusionPBX/FreeSWITCH Support Channel.

Most Read Posts in Technology